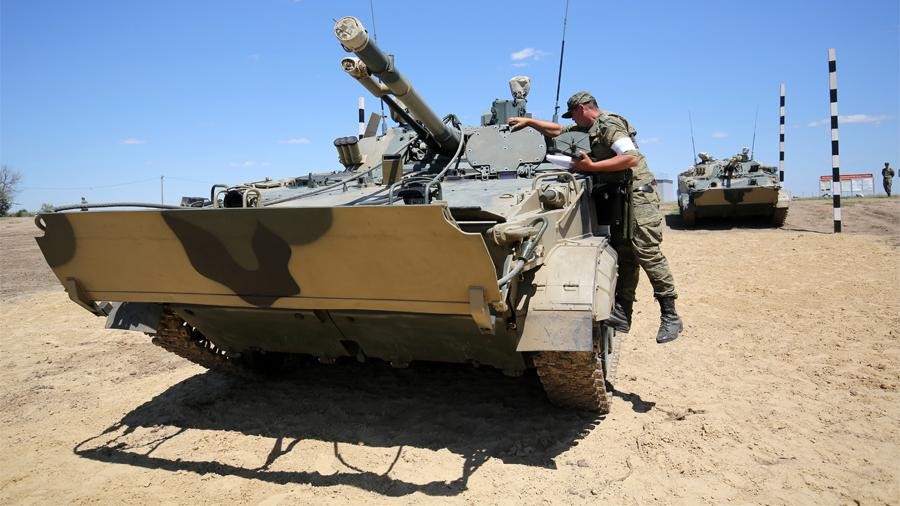 The southern military district will strengthen the "supertreshki". The Ministry of Defense has signed an additional agreement to the contract for the supply of 168 BMP-3. It was decided that they would join the troops in a variant with enhanced protection against anti-tank missiles. The vehicle will also receive modern optoelectronic surveillance devices and an advanced laser searchlight for night combat. It is planned that the updated BMP will enter service this year. According to experts, they will seriously strengthen the land grouping in the south of the country.

The decision to purchase new BMP-3 with enhanced protection and updated electronic systems was made at the beginning of this year, sources told Izvestia in the military-industrial complex and the military department. Therefore, in July, changes were made to the ongoing large-scale state contract for the purchase of BMP-3. These combat vehicles will be delivered primarily to parts of the Southern Military District (SE).

The contract between the Ministry of Defense and KBP JSC for the purchase of armored vehicles has become one of the largest in recent years. The Military Department has purchased 168 BMP-3s for more than 14 billion rubles with a delivery period in 2020-2021. The agreement is already being implemented. This year, the troops will receive 53 combat vehicles. In the next one — another 115. This is enough to re-equip from five to six motorized rifle battalions: each motorized rifle regiment or brigade has three such units

The contract for the BMP-3 became part of a large-scale plan of the military department to re-equip the Ground Forces with modern equipment. According to the Ministry of Defense, thanks to mass purchases from 2012 to 2019, the share of new and upgraded weapons in them rose from 15% to 51.6%. It is planned to increase this figure to 70%.

Traditionally, the Southern Military District is the first to receive all the most modern weapons, military expert Viktor Murakhovsky told Izvestia.

- The district is considered one of the most important in terms of dangers near the borders of Russia, — the specialist explained. - It is enough to recall the well-known events in Ukraine, the increase in the intensity and scale of NATO exercises in the Black Sea and on the territory of neighboring countries, the events in Syria, the increase in tension between Azerbaijan and Armenia, Turkey's significant efforts to develop its armed forces. This is a strategically important area where it is necessary to ensure the security of our country.

Parts of the Ground Forces have been updated at a slower pace in recent years than the aviation and navy. But now the process of rearmament with the latest technology has reached them, the expert added.

According to the purchase notice (available to Izvestia), the BMP-3 will go to the troops in a configuration very different from the basic one. The vehicles will receive additional protection from anti-tank missiles and the latest optoelectronic surveillance devices with a laser searchlight.

- The BMP—3 is a fairly modern car, — said Viktor Murakhovsky. And if we implement existing ideas to increase firepower and security, then this technique will be at a completely modern level. It will seriously strengthen the potential of the Southern Military District grouping. It should be understood that when the district troops have modern T-90A and T-72B3 tanks, and IFVs remain obsolete, this does not contribute to the effective use of other types of equipment. Everything has to be balanced. Even if you have the most modern artillery systems and other weapons, the lag in the development of the IFV will pull the entire group back.

The most striking change on the new BMP will be the mounted mounted protection. The machines are equipped with a set of removable screens and anti-cumulative grilles. The development of the "Research Institute of Steel" should reliably cover not only the hull, but also the tower. Such "transparent armor" destroys anti-tank grenades and missiles that hit the car even before they can explode and harm it.

It will also be possible to install additional dynamic protection on the BMP-3. The manufacturer previously demonstrated a variant of the machine with mounted "soft" armor for actions in cities. It allows you to destroy the cumulative jet by detonating explosives placed in soft covers on the body of armored vehicles.

The machines produced under the state contract will also receive optics and electronics updated compared to the original version. Modern thermal night vision devices will appear not only in the gunner, but also in the commander.

The PL-1-01 laser searchlight should also increase combat capability at night. It brightly illuminates targets in the infrared range for night vision devices. At the same time, its radiation remains almost invisible to the naked eye from a distance of 100 m.

To re-equip the Ground Forces, the Ministry of Defense received about 200 new BMP-3s in 2015-2017. In the next two years, the contract for the production of a comparable batch was executed. They had improvements compared to Soviet models, but were purchased without additional protection kits.

To modernize older versions of the BMP-3, the possibility of equipping them with a fundamentally different combat module (BM) is being worked out. The existing tower is planned to be replaced with a universal BM "Epoch". Its armament includes a 57 mm automatic cannon and long-range anti-tank guided missiles "Kornet". In terms of their armor penetration, they are almost twice as good as the standard ATGM "Arkan", fired through a 100-millimeter cannon. The module also includes effective modern surveillance devices.

Serial production of the heavily armed BMP began in 1987. In the post-Soviet era, the newest and most powerful at that time BMP-3 quickly became the most popular export product. Over 1.5 thousand of them were delivered abroad. In the 1990s, the United Arab Emirates received 815 units under several contracts. Another 122 cars were purchased by Kuwait. Armored vehicles were also purchased by Cyprus and South Korea.

Already in the 2000s, contracts for the BMP-3 were signed with Azerbaijan, Venezuela and Indonesia. But the record holder was Iraq, which immediately ordered 500 combat vehicles for the revival of the national army and the fight against terrorists.